Had a great 5 mile run on a beautiful winter day perfect for running with a beautiful woman this afternoon. It was brisk, about 32, but sunny, light winds and just gorgeous outside. A great afternoon to run with my best friend and honey! She's so tough too, after about a mile and a half she was down to runnin' in a t-shirt! GAH! Here I am in a hoodie, with a hat and gloves on and she's runnin' next to me in a t-shirt. I probably looked like a candidate for Wuss of the Year! I run a lot by myself so, it's always great to be able to run with Tammy. I appreciate the blessing of being able to be with her in moments like this afternoon more and more every day. She's quite simply, awesome and I am crazy about her. :-)

Awww, what an awesome hubby! I wish Todd could run with me but his back prevents it. :(

We tried biking together but that was a flop as well. I think he's just not the athletic type:)

Maybe I can get him to start walking with me again. Those evening walks used to be so much fun. Good time to catch up and hear about each other's day:)

I'm glad you and Tammy have that time together. I'm sure that makes it extra special for you. I can see Todd's eyes glaze over when I start talking about running..LOL

Oh and I SAW That 'stay ahead of Marion' crapola over there..
You're toast now, my friend..look out!:)

Women rock! Go Tammy! Are you guys doing any races together soon?

I've been trying to get Ryan to run with me. He doesn't mind doing short runs on the treadmill, but not outside, which is where I'd much rather be. But he's not a runner, he's a swimmer. I've asked him for swim lessons from him, but it's not much of a social sport...oh well. :)

Hey, Sara! I wasn't much of a runner before either, so there is always hope for Ryan. I, too, started on a treadmill and DID NOT want to transition to outdoors AT ALL. An unreliable treadmill changed all that though.

We would like to do a race together and have done the Race for the Cure. I have my eye on The Flying Pig half in Cinci, but it all depends on if she can train without injury. Her shins give her trouble. Last year we had planned on doing the Glass City Marathon as a two-person team, but she developed IT band problems that caused us to scratch that. I would much rather run side by side with her anyway though so, a race like The Pig or Grand Rapids half would be cool. I've got my fingers crossed. 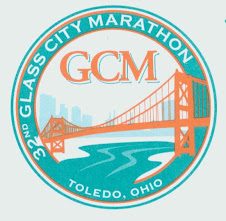 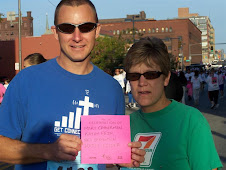 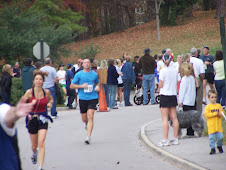 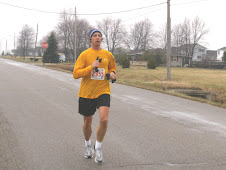 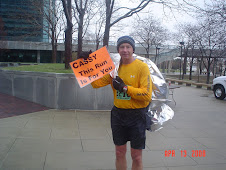